In our next Smartkarma Webinar, Olivier Desbarres will discuss his outlook for Asian currencies. The webinar will be held on 1 April 2020 at 1700hrs Singapore/Hong Kong time.

Register for the Webinar here.

Olivier Desbarres has over 21 years of experience in the finance industry, including 15 years as a senior Economist, Rates and FX strategist for Credit Suisse and Barclays in Moscow, London and Singapore.

In his last role, he was Head of Asia-Pacific FX Strategy at Barclays in Singapore and focal point for G10 research. Prior to that, Olivier covered Emerging Europe, Middle and Africa at Credit Suisse in London where he built a strong track record with the world’s largest fund managers. He was also the UK Rates Strategist for two years and wrote extensively on EU and Eurozone membership. 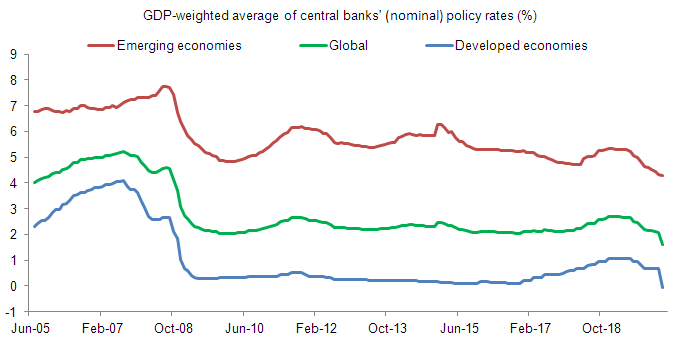 Developed central banks in the past week have been falling over themselves to loosen monetary policy and secure the proper functioning of financial and credit markets.

The Fed, RBNZ, Bank of Canada, Bank of England and Norges Bank have delivered inter-meeting policy rate cuts of between 50bp and 100bp and our measure of the developed central bank policy rate has been cut 74bp so far in March, the largest monthly cut since December 2008. It is now in negative territory (-0.05%) for the first time in at least 15 years.

This has raised concerns that developed central banks are close to running out of ammunition, at least in terms of policy rate cuts, which have arguably weighed on global equities and contributed to the outperformance of the Dollar, Euro, Swiss Franc and Yen.

In contrast, major Emerging Market (EM) central banks have, with the exception of Bank of Korea and Banco Central de Chile, kept their policy rates unchanged in the past fortnight. This is broadly in line with our view that “the overall pace and magnitude of [central bank] policy rate cuts in Non-Japan Asia will be modest.”

The EM central bank policy rate – a GDP-weighted average of policy rates in 20 major EM economies – was admittedly cut a sizeable 74bp between mid-2019 and end-January 2020 but has been cut only 4bp so far in March, albeit to a new multi-decade low of about 4.3%.

We think EM central banks are concerned that further rates cuts could exacerbate capital outflows and put further downward pressure on their currencies and upward pressure on already high and/or rising headline CPI-inflation.

As a simple rule of thumb we think EM central banks with a high real policy rate and stable/appreciating currencies are more likely to cut their policy rates in coming weeks (see Figure 7). On this basis central banks in India, the Philippines and Taiwan seemingly have room to cut rates.

We also think that the South African Reserve Bank will cut rates at its policy meeting on 19th March, as long as the Rand remains broadly stable as it has been in the past week. 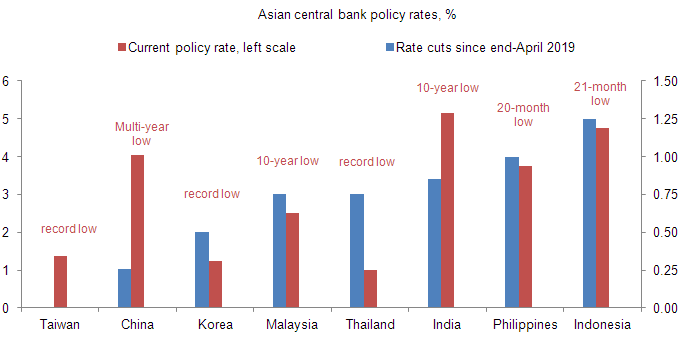