Helios Towers Ltd (HET UK) (HT) is a leading independent mobile tower operator in Africa. HT has filed for an IPO in the London Stock Exchange (LSE). HT plans to raise $125m floating at least 25% of its ownership. The IPO price range of 115-145 pence per share implies a post-listing market cap of $1.42bn-$1.79bn. IPO books will be closed on (Monday) October 14th and the stock will likely start trading on (Tuesday) October 15th.

In our previous note, Helios Towers IPO (Part I): More Room for Inorganic Growth and a Lot More to Like About, we were broadly positive about HT’s operations and suggested that there is still room for HT to grow inorganically in its markets.

In this note, we present our forecast and take a closer look at HT’s capex plans and valuation. 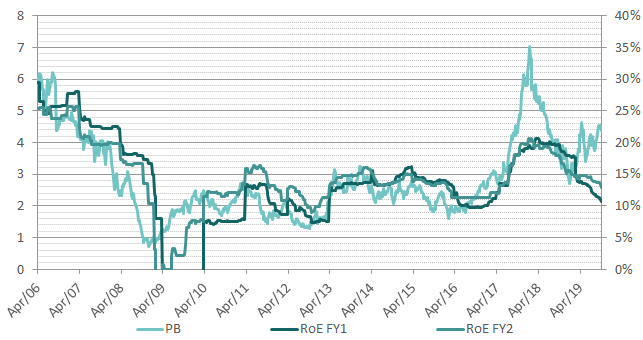 Yesterday Yaskawa surprised negatively by reporting just ¥5.3bn in 2Q OP vs. consensus at ¥10.4bn and revising down its outlook by 46% to ¥25bn at the OP level.

Exxon Mobil (XOM US) and partners awarded the key contracts for the Rovuma LNG project in Mozambique, which makes the project’s sanction almost certain. Despite this, it delayed the final investment decision (FID) until next year. Another bumper set of contract awards are going to TechnipFMC PLC (FTI FP), Jgc Corp (1963 JP) and Fluor Corp (FLR US). Yet another positive for the LNG contractor market.