Brief Korea: The Guerrilla War Against The PBOC and more 1. The Guerrilla War Against The PBOC

In the wake of the news of the coronavirus infection, the Chinese leadership went into overdrive and made it a Draghi-like “whatever it takes” moment to prevent panic and stabilize markets. When the stock markets opened after the Lunar New Year break, the authorities prohibited short sales, directed large shareholders not to sell their holdings and the PBOC turned on their firehose of liquidity to support the stock market. Those steps largely succeeded. China’s stock markets stabilized and recovered, and so too did the markets of China’s Asian trading partners.

However, there were signs that the market is unimpressed by the steps taken by Beijing to control the outbreak and limit its economic impact. Market participants were conducting a guerrilla campaign against the PBOC.

While stock markets have been strong, commodity markets have been weak. Foreign exchange markets are also taking a definite risk-off tone, contrary to the PBOC’s efforts to support risk appetite. Even Chinese market internals are exhibiting skepticism, as financial stocks have lagged the market rally.

This argues for a contrarian position of long EM, commodities, and commodity producers and short U.S. equities. Aggressive traders could enter into a long and short pairs trade, while more risk-controlled accounts could just overweight and underweight.

If the bulls are right, and the coronavirus outbreak recedes and comes under control, U.S. equities should begin to underperform as the demand for safe havens, while cyclically sensitive EM and commodities would rally. On the other hand, if the outbreak were to spiral out of control and global growth collapses, U.S. equities would correct, but there is likely less downside risk in EM and commodity exposure because they have already fallen substantially.

2. Samsung C/1P Is At -1.4σ & 1P Discount Close to an All-Time Low: Structural Reversion Is Ahead 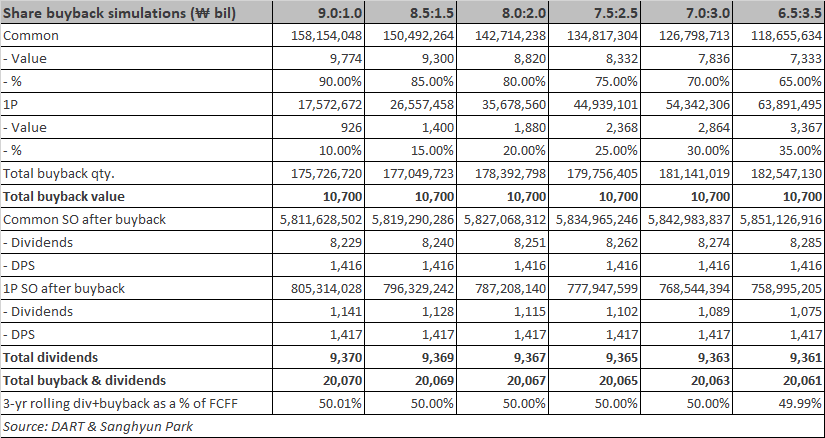 JNTC is one of the global leaders in making 3D cover (tempered) glass and connector parts for smartphones. The IPO base deal size is from US$80 million to US$98 million. The book-building for the institutional investors starts on 19 February.

Overall, we believe that the combination of higher operating margin, ROE, and sales growth than its peers warrants JNTC higher valuation multiples than its peers. Thus, we applied a 20% premium multiple to the comps (19.4x). Using our estimated 2019 net profit of 37.2 billion won and applying a 19.4x P/E multiple results in an implied market cap of 720.8 billion won or implied price of 12,471 won per share, which is a 19% premium to the high end of the IPO price range of 10,500 won. This is a reasonably attractive upside so we have a POSITIVE view on JNTC.

The Korea Financial Supervisory Service (KFSS) announced the amendment to the Enforcement Regulations of Financial Investment Business Regulations on February 11. This amendment contains the removal of the 30% limit weight of a single stock in local ETFs. For instance, those ETFs mirroring KOSPI 200 can now have Samsung Electronics common shares for more than 30% weight. The schedule of the enactment is as follows. March 22 is the deadline for the review. Then, the amendment will become in effect as of the second quarter of this year, which is the first of April.

The amended Enforcement Decree of the Financial Investment Services and Capital Markets Act of Korea (the “Capital Markets Act”) went into effect starting on February 1, 2020. One major change made by this amendment (Article 154) is the clarification and improvement of the beneficial ownership disclosure rule which is a so-called “5% rule” in Korea. We think that this latest amendment provides a legal basis for institutional investor activism in South Korea.

The substantial shareholders whose minimum shareholding is 5 percent are required to disclose information including their investment intentions whether or not to influence company management and policies. Before the amendment, it was not clear whether institutional investors should be regarded as having an intention to influence management when exercising stewardship responsibilities such as publicly sending letters to management and filing shareholder proposals to (i) raise dividends, (ii) limit CEO pay, and/or (iii) dismiss directors who were found guilty of illegally damaging the firm. However, this latest amendment finally clarified it by creating a new criterion that is no longer categorized as either “influencing management” or “just a simple portfolio investment”. And then, it moved the aforementioned stewardship activities to this new category, which we named “investment with limited stewardship”.

In our previous insight Two Notable Changes in National Pension Service of Korea: Activism Guideline and Delegation of Votes, we noted that NPS would pay particular attention to three major issues – (i) dividend policy, (ii) executive compensation scheme, and (iii) qualifications of directors – which are all closely linked to a company’s approach to capital allocation. The amended Capital Markets Act empowers institutional investors to exert more pressure on boards to resolve the exact same issues from (i) to (iii) as we described above.

Just a few clarifications. Regarding (i) dividend and (ii) executive compensation issues, it is true that the amended Capital Markets Act newly allowed institutional investors to exercise minority shareholder rights conferred by the law without changing their investment intentions to “influencing management”. However, state-run pension funds have already been allowed to do so even before the amendment. Also, this amendment added one clarifying sentence to Article 154-1, which stipulates that investors are now allowed to exercise minority shareholder rights to dismiss directors who were convicted of illegal actions and/or bringing irrecoverable damages to the company. Some local media reported that this is a major change, but this is not true. Article 385-2 and Article 402 of the Commercial Act of Korea have already provided such exception. That is, this latest revision of the Capital Markets Act aims at making those two Acts consistent with each other so that investors can be more vocal about (iii) qualifications of directors with no worries over conflicts of law.

As of February 7, 2020, NPS and a few value-oriented institutional investors changed their investment intentions from “simple portfolio investment” to “investment with limited stewardship” for some of their invested stocks. We listed those stocks in the Detail section. We selected Daelim Industrial (000210 KS) as a primary entity of our insight because it is highly likely that NPS files shareholder proposals to raise its dividends and/or to remove Lee Hae-wook on the board. Though Lee Hae-wook is not yet convicted illegally damaging the firm, he is facing trial for alleged embezzlement and breach of duty on April 21, 2020. NPS holds 12.82% in Daelim Industrial (000210 KS).

Here is a summary of the key changes.