2. Biden Still the Candidate to Beat, for Both Democrats and Trump 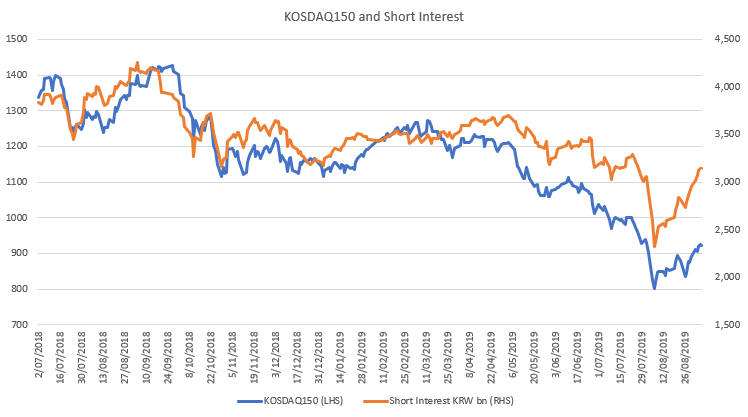 The Korea Exchange (KRX) publishes outstanding short position data daily with a two day lag. The data below is of the close of 6 September.

We also take a look at how the short interest has evolved in a few large names over the last year.

The pick-up game is changing the customer and structural capital landscape for companies. I’m excited about McDonald’s new “McDonald’s to Go” pick-up concept store that it is piloting in London as it represents a new distribution channel with promising returns. While the limited menu of “McDonald’s to Go” trades off variety of choice for convenience, lululemon’s order online/pick-up in-store service, which it has now rolled out to nearly all its stores in North America, offers its customers both convenience plus a wider variety of choice. In addition to being a much lower-cost distribution channel than delivery, in-store pick-up and return offers retailers the opportunity to directly interact with customers and enhance the emotional connection. This explains why Nordstrom is making a strange move testing accepting online returns from its rivals at its two new Nordstrom Local stores in NYC. Amazon Go stores are playing pick-up too as Amazon looks to leverage its physical structural capital by trialing pick-up and return options at select Amazon Go stores in NYC and San Francisco. And on a final note, even Facebook is playing the pick-up game — but in a different sense — as it just launched Facebook Dating in the U.S.!